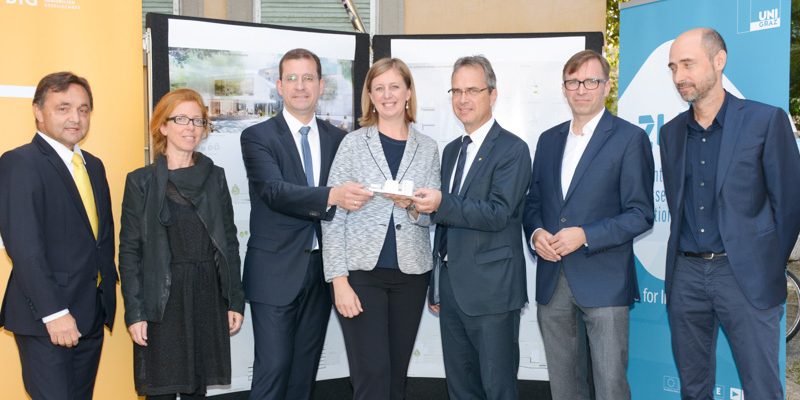 Young talents are encouraged, creative spirits are awakened: the Karl Franzens University Graz is building a new centre for knowledge and innovation transfer (ZWI) at Schubertstraße 6a with the support of the Province of Styria and the European Regional Development Fund (ERDF). At the same time the BIG (Bundesimmobiliengesellschaft in direct neighbourhood a new home of the Hochschülerschaft and the ÖH Servicecenter will be established) At a media event today, Wednesday, 6 September 2017 at the University of Graz, the project and the building project were officially presented.

The three-part building complex, which will place the existing villa at the architectural centre, among other things, will offer space for events, 3000 square metres of office space for entrepreneurs and Co-WorkingSpaces for start-ups from autumn 2020. The 12 million euro project is financed by subsidies from the Province of Styria and the European Regional Development Fund (EFRE) with the participation of the University of Graz. After completion of the detailed planning and the official procedures, construction is scheduled to start in 2019. The winning project was designed by the Graz and Innsbruck architects ARGE lebidris architektur+ architect Iris Reiter, which clearly stood out against 26 competitors in a Europe-wide competition.

“This project is not only advancing campus development. In the sense of an innovation transfer and closely connected with the social topic and the university field of strength Healthy ageing and demographic change, the University of Graz would like to strengthen its initiatives in the field of entrepreneurship and further increase the number of business start-ups coming from the university. With the BIG as project partner and the Province of Styria as sponsor, we can implement the project at the Schubertstraße site by 2020,” emphasizes Dr. Peter Riedler, Vice Rector for Finance, Resources and Site Development at the University of Graz.

“The excellent cooperation between our universities and research institutions and companies is the main reason why Styria, with a regional research and development ratio of 5.16 percent, is the number one research country in Europe. The Center for Knowledge and Innovation Transfer on the campus of the Karl-Franzens University will offer further opportunities for cooperation between science and industry and, by focusing on modern ageing and demographic change, will make an important contribution to our society,” says Barbara Eibinger-Miedl, State Councillor for Economics and Science.

“Science and business are essential foundations for the further development of society. BIG provides the space for this and thus underpins its claim to be a connecting element between the disciplines. In the past ten years alone, building projects with an investment volume of over 2.5 billion euros have been realized at the universities. The ZWI is the next milestone to optimize the infrastructure in this segment,” says Hans-Peter Weiss, Managing Director of BIG.

According to a survey by the Chamber of Commerce, about 6000 companies were founded in Styria in 2016. Many of these start-ups have their origins in the university sector. The ZWI aims to create a meeting centre between university and business with spatial capacities for start-ups.

“A special focus in university teaching lies in the awareness building of students to act entrepreneurially and to raise their start-up potential. The activities of the Entrepreneurship Department and the highly sought-after TIMEGATE project, as well as the initiatives Gründergarage, Gründungsbüro, Ideengengerk and Venturepreneurship Aula, represent one approach. Students from all disciplines thus gain basic business knowledge and the right tools for self-employment,” explains Prof. Dr. Alfred Gutschelhofer, head of the Institute for Business Management and Entrepreneurship.

“The new centre is intended to facilitate rapid networking of young entrepreneurs with Styrian businesses and in the academic community. In addition, the centre should make the competences available at Graz University even more visible and act as a contact point for students, researchers, people interested in founding a company and companies,” explains Bernhard Weber, ZWI Managing Director.

The costs for the ZWI amount to 12 million euros, whereby one million euros could be won from funds of the Province of Styria and 4 million euros through support from the European Regional Development Fund. The remaining part will be refinanced through rental income from office space. BIG will take over the entire project management. According to detailed planning, construction will start at the beginning of 2019 and the building should be ready for occupancy by 2020.

Winning project: Architecture made in Graz-Innsbruck

The Centre for Knowledge and Innovation Transfer is not only an important part of the campus development, but will also set an urban accent. The centre closes a structural gap between Schubertstraße and Leechgasse and upgrades the area behind the Mensa building. 27 projects were submitted as part of the Europe-wide architectural competition. The expert jury selected the design by ARGE lebidris architektur+ architect Iris Reiter (Innsbruck) as the winning project.

The design is based on an ensemble of four buildings that form a service cluster for students on the site between Leechgasse and Schubertstraße. The ÖH and ZWI functions are organized according to frequency and publicity. The new ÖH Service Center on Schubertstraße functions as a hub on the campus. It is planned as a two-storey pavilion, functional areas such as the printing works and offices without party traffic will be positioned on the basement floor in order to provide a view of the villa and create a spatial expanse to the Uni-Graz campus.

The villa from 1869 is established in the centre as an open house and entrance to the ZWI – contact point for young researchers, ideas workshop and meeting place. The building is gutted except for the large staircase, which is still used for access. The result will be a ground floor with reception area and gastronomy that is permeable to the south, two upper floors with large areas for co-working and a conference area in the attic with a view of the campus of the University of Graz.

The new building with six office floors for start-ups and younger companies combines old and new – according to the motto Modern Ageing and Demographic Change. The level of the mezzanine will be transferred to the new building. The shared raised base zone ensures the quality of the workplaces on the ground floor and a well-lit garage is available for individual mobility such as bicycles and cars with electric filling stations. A bridge between the villa and ZWI connects the old and new buildings.

ÖH Uni Graz and the ÖH-Servicecenter, which are currently located in the existing villa, will be accommodated for the duration of the construction work in replacement quarters in the area of the pre-clinic.

As with all construction projects carried out by BIG on the campus of the University of Graz, attention is paid to sustainable and resource-saving construction methods. The ÖH and ZWI buildings will be connected to the solar thermal system of the laboratory building at Universitätsplatz 1 and thus supplied with hot water.

Free image material with the identifier “Uni Graz/cp-pictures” under: https://public.sharepoint.uni-graz.at/sites/bilderpool/Pool/unigraz_170906_zwi-1.jpg